MACAU : THE VEGAS OF ASIA

A tiny former Portuguese enclave, Macau is only 35 miles away from Hong Kong across the Pearl River Delta and an hour away by hydrofoil. It is the world’s fastest growing economy, according to the Economist Intelligence Unit, with tourism and gaming seeing explosive growth. Centuries of culture and tradition influenced by its Portuguese settlers since 1557 have shaped the food and wine scene here – and washing down food with an inexpensive bottle of wine is the norm. Last month, Macau hosted its first Wine & Dine Festival with the support of the Macau government and has a thriving Wine Society.

Macau: A Taste of Things to Come – a Q&A with judge David Wong
HKIWSC judge, David Wong shares his knowledge on Macau as a growing wine market.
Why Macau?
In 2008, Macau removed the 15% tax duty on wine in a bid to become a player in the region’s fine wine market. Since then Macau has seen a huge growth in wine import, wine consumption and wine education. According to Government statistics, red wines dominate at 90% of the total volume, 6% of the volume is white.
Which countries dominate consumption?
For still wines, France dominates. In 2010, France represented 35% of the total volume and an amazing 83% of the value. Being a former colony, Portugal comes next at 26% of the volume but only 3.4% of the value, although still significant in volume terms. In value terms, Australia is the next most significant producer, but with only 4.5% of the value, although in volume terms a significant 9.3% of the volume.
Who are the ones to watch?
There is an upward trend in the Chinese market for French wines and especially those from Bordeaux. China overtook the UK and Germany to become Bordeaux’s largest customers, with exports growing at 67% but the market has seen signs it is on the wane. Could Burgundy be the next big “red” hope for China?
Although French and Portuguese wines are the top Old World imported wines, Australia continues to fly the flag for the New World despite a difficult couple of years in the worldwide market. Other New World wine producing countries like New Zealand, Chile, the United States, Argentina and South Africa are bringing more of their respected wines into the local market.
What are the trends in wine education and on the wine scene?
As the buyer’s market in Macau is increasing for fine wine, the local hospitality needs for professional and knowledgeable sommeliers is growing. The Institute for Tourism Studies (IFT) is a Hotel school which also has Culinary Arts as part of its Bachelor degree programme and is the Wine Center in Macau. The IFT provides the equally prestigious Wine & Spirit Education Trust, UK (WSET) and Court of Master’s Sommeliers (CMS) Courses in Macau, each one paving the way to a Master of Wine or a Master Sommelier title. The WSET course has seen record numbers of students enrolling every year and IFT Alumni have gone on to become sommeliers in Macau’s fast developing hotel industry.
Another important wine influence is the vibrant Macau Wine Society which was formed in December 1995 and now has more than 200 active members from all pillars of society in Macau and is headed up by Filipe Santos. The society organizes many events including the annual “Top Ten Portuguese Wines”, which is attended by members of its sister branch, the Hong Kong Wine Society.
What’s next?
A growing interest in the local wine market has seen many famous producers and wine makers come through into Macau. For example, John Duval, Peter Gago, Dave Powell, Ernst Loosen, Nicolas Potel, Pierre Perrin, Gaia Gaja and Dirk Niepoort amongst others. Their enthusiasm for sharing their knowledge and experience in Macau, has given the hospitality trade and consumers alike, a taste of things to come.

About David Wong
David Wong is the executive assistant manager at the Macau Institute for Tourism Studies (IFT), author of The Art of Modern Portuguese Cuisine and founder of the Macau Culinary Association. He is also an approved tutor for the Wine and Spirit Education Trust, UK (WSET).

"I have been judging this prestigious competition since the beginning and I am honored and delighted to be invited back again this year".
Facebook: davidwong1966
Twitter: @davidwong1966
Category:
Share 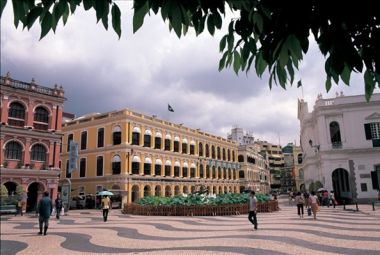